Waking Up Is Hard To Do 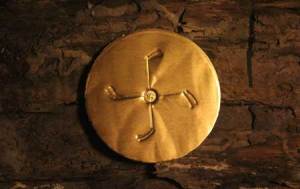 Moses didn’t have a squirrel’s notion of anything when he woke up but that he was in a hospital bed with this Indian in the room.  I suppose that’s why he remembers our first meeting better than I do.  Yeah, I remember tossing some newspapers at him but not the conversation.  His eyes, that’s what I do remember.  They were clear now and blue.  His hair was wild and looked like a torn up Brillo pad.  Spoke perfect English but not one idea of who he was.  That’s why I gave him the newspapers.

When I say, perfect English, I mean he spoke without an accent.  I joke him about that now because he talks all New Yorkified like he was born and bred there.  I guess without knowing who he was, he took on the affectations of his “new” home.  The hospital was no home for him and neither was Arizona.  I believe the only part he ever saw of this state was where he appeared and the airport.

During his committal, we talked a lot, played chess and watch bad TV.  A friendship was born in those white walls full of the not so fortunate.  He kept looking for clues, asking me all the time for books, papers, magazines anything that might help him piece together what happened.  I felt sorry for the guy.  I mean, how would you like waking up knowing squat about who you are?

When it became obvious he wasn’t going to get his memory back and that he wasn’t crazy (that happened later), I told him he needed to move on with his life.  So I hooked him up with my half-brother in New York.  They clicked like two parts of a seatbelt.

I would visit once in a while.  Don’t like the northeast much.  People up there are crazy.  But we did have fun.  Moses fits in up there.  He kind of re-molded himself into a New Yorker.  Makes sense because there wasn’t much personal for him to grab onto here so why not grab onto what was around him.

Chess, the game, was introduced to me by my friend in the mental hospital, the one who found me and got me into the place. I am not now nor was I ever any good at it. But he insisted. Said it would train my mind and in training it, might help me remember. Twenty years later, no results on the memory count.

What I do appreciate is the strategy, intellectually and from a distance. One must think many moves ahead, be able to reason in parallel and be able to adjust to the attacks of one’s opponent. Like life. We’d play every night. Or more correctly, he’d beat me every time. I never could get my mind around the many facets of the game even though its true nature was something significant.

One night, he came into the rec room with the board. I started getting my pieces in order but he stopped me. He held out eight Queens and asked that I set them up on the board in such a way that they could not attack one another. Wondering what he was up to I took the Queens and tried. Every set-up I attempted led to a blood bath.

My whole time in the hospital, he hammered me on the game’s intricacies. But as I said, my mind’s not wired that way. After fifteen fumbling minutes of trial and error, he asked, “Do you want to see how it’s done?”

He then set up all eight Queens on the board in such a way that not one could attack.

I looked at the board from all angles and he was right. They were at peace.

“Move one and they all devour each other.”

“No. They’re set up out of sync. One board, one Queen. Here we have eight. Their world doesn’t work with eight. So, their new paradigm is tenuous. A stand-off. The first to move may be the first taken out. They have achieved balance but not their end goal.”

“Win the game by taking the King.”

He then set up the pieces and proceeded to beat me. We never spoke of that mental exercise again but it has stuck with me through the years.