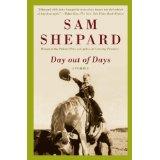 – 6:35 PM, sat down in the back of the bus hoping to be left alone.  I was.   Digging in my backpack, I saw Sam Shepards’s new volume of stories purchased in New York.  Not even cracked.  Will filled my time the previous day.  Not wanting to sit in my own melancholy, I began to read as the bus pulled away.  The sun blushed on its fall behind the horizon.

The setting was perfect for this type of a read.  Mr. Shepard’s stories were of beheadings, long car trips and youth lost to a life long-lived.  A day ago, these would have been entertaining and possibly thought provoking but their deeper meanings lost to my linear need to find answers.

In his prose, Mr. Shepard seems to float in the past while remaining grounded in the present.  I, who feel out of time, need order.  He is Bird to my Soussa, able to float on riffs only he can hear while I march to the heavy beat of a bass drum.  My time with Will had broken my rhythm.  I was more accepting of this prose.  I did not always have to know a stories meaning but could now allow it to just affect me.

That’s what I did throughout the evening.  I read.  I read things unimportant to my work.  Things that made me think not about me but about life, about the living.  About what life is outside of my little sphere of experience.

I woke next morning, the book half read in my lap.  It was early and we were pulling into Oklahoma City’s blue and beige bus station.  I had about an hour layover and needed coffee.  Amazing, less than a mile away, I found a Starbucks.  And again, I passed a sports arena on the way.  Similitude, synchronous or just all down towns are the same?

I cleaned up a bit in the washroom and then bought a large coffee and some type of breakfast sandwich.  I sat and read while I ate.  Shepard is very bittersweet in this volume.  I was hit hard and fast by one story’s theme about the desperation of not being like one’s father.  I put down the book.  For the first time, I realized my whole existence was that of an orphan.

This may seem obvious to everyone else but right then, it struck me like a jolt from a live wire.  And then, I don’t know where they came from … tears.  Crying.  Me.  Into my coffee, tears dropped from my cheeks.  Luckily, I was in a corner and so turned away to regain control of myself.

I wanted a father.  I wanted someone to explain what life was all about from their own personal perspective.  Mr. Shepard’s narrator had railed against being like the man who sired him yet in the end, they were one and the same.  This was a realization I would never be able to come to terms with.  I had no father.  And this thought cut me so deeply, I wasn’t sure I could recover.

Then I met Beth and Sissy.

Moses Haygood is an accomplished television writer, investigator and author. From UFOs to monsters, most of his professional life has been writing about or debunking the miraculous. Moses is now on a course of personal research hoping to undercover his past. In 1989, he was found on a desert roadside with no memory. END_OF_DOCUMENT_TOKEN_TO_BE_REPLACED
This entry was posted on Tuesday, August 2nd, 2011 at 8:59 PM and tagged with Bass Drum, beheadings, Bird, Car Trips, Day Out Of Days, Fathers and Sons, Reading, Rhythm, Sam Shepard, Soussa and posted in My Personal Ramblings. You can follow any responses to this entry through the RSS 2.0 feed.
« New York to St. Louis
Oklahoma City to Gallup »