Earlier I posted about dragons, battles and a little boy.  Be it the holidays or just too much time alone, these dreams resonate strongly with me.  Below is one I had the other night.

The little boy woke to a thumping.  Not so much at the door of his tree but at its midpoint.  As if some large hand were slamming fist to trunk on his home and the shock vibrated all the way down to the tree’s base. 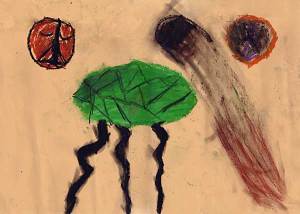 The boy slipped from bed, stepped over his crayons and paper left from the previous night and snuck downstairs.  At the foot of his door, balanced on it’s thresh hold, a folded piece of paper.

Another thump rattled cups and bowls in his pantry.  Not trusting the situation, the boy selected his favorite lance, and with great care dragged the note across the floor where he stood near the stairs.  Outside he heard the snarls and bleats of the large beasts that lived high in the mountains.  The boy opened the note.  It was unintelligible but he recognized the writing.

Today’s opening move or declaration of surrender, his or theirs, the boy had no idea.  He could not read dragon.  Every time he tried, it changed and so he had given up ages ago.  Piercing the page with his lance, the boy walked to the door, the dragon’s note a fragile banner.

Carefully, he spied out the door’s peep-hole.  They were all spread out around the far side of his pond nipping at each other.  All except one.  It stood close, using its snout as a rapper on the tree’s bark.  Bits had fallen to the ground near the beast’s feet.

Opening move then.  Unlatching the door, the boy stepped quickly back.  Leading with the note stuck through on his lance, he walked slowly outside.  The dragons stopped their teeth gnashing and focused on the boy.  Their eyes gleamed either out of hunger, triumph or fear.  There was no telling with dragons.  He stood a moment contemplating his next move.

The dragon closest to him, the one who thumped his tree, looked down at him.  He bobbed his snout at the note.  The boy, taking this as a cue, began to slowly move his lance towards this dragon.  He moved slowly so that the dragon would not think he was attacking.  His intention was to drop the note at the dragon’s feet.  Instead, a wind whipped up and blew the note off its perch on the lance and floated it into the middle of the pond.

There was a tense moment as the dragon in front of the boy watched the note sail away to sink onto the water’s surface.  The boy sensed no attack from this beast, but before this thought was thought, the others flew across the pond in ferocious formation.   The boy found himself trapped between his pond and nine fierce dragons.  The monsters reared up and snarled, forcing the boy backward by measured steps.

At the ponds edge, the boy stopped.  He had no place to go.  The dragons fell back on their haunches, readying themselves to pounce.  But this boy was no stranger to combat.  He’d beaten these beasts on more than one occasion.

With a practiced move, he flung his lance from a defensive position in front, up and around to a back handed sword grip.   Its weigh dropped it’s tip into the water.  With a quick turn, the boy stuck the lance into the middle of the pond and with both hands jumped, flinging himself above the water to the other side like a pole-vaulter competing for gold.

Without thought, the dragons tried to follow.  In their hysteria to catch the boy, they had forgotten a very important thing.  That is that water does not like dragons.  In fact, water is to dragons what acid is to little boys.  Pulling back onto the shore, the dragons cried out nursing wounds and looking very cowed.

Without thought, the boy vaulted the pond again landing behind his foes.  With a staunch swing of lance, he paddled each dragon’s behind with the sharp end of his weapon.  This sent each of the dragons into frenzied flight, each taking off in a different direction.  All but one flew off without looking.  It was the one, the one who had thumped his tree so mercilessly.  The one who had slipped the note under his door and watched as it fluttered off his lance onto the pond.  This one, scorched by the water and whipped across his rump, looked back.  The boy could not tell if the look was one of anger, embarrassment or sorrow.  This dragon turned his head and flew off to his lair among the mountain caves in the far distance.

The boy watched until the dragon had become a speck.  The pond’s surface was calm with the wind’s leaving.  The boy walked back into his house.  He was shaken by this encounter.  Not from the peril he had been in but by the curious behavior of that one dragon.  Sitting down at his little table, he tried to recreate the note with his crayons.  But every time he tried, his memory of it changed.  The lines, all squiggly, never met the representation he thought he remembered.  Finally, he gave up.  Dragon was not a thing he was to understand.

Moses Haygood is an accomplished television writer, investigator and author. From UFOs to monsters, most of his professional life has been writing about or debunking the miraculous. Moses is now on a course of personal research hoping to undercover his past. In 1989, he was found on a desert roadside with no memory. END_OF_DOCUMENT_TOKEN_TO_BE_REPLACED
This entry was posted on Sunday, December 26th, 2010 at 2:58 PM and tagged with Battle, Dragons, Dreams, Lances and posted in My Personal Ramblings. You can follow any responses to this entry through the RSS 2.0 feed.
« Christmas Eve … Again
Dragons 2 »

One response to “Dragons”